THE TOP CLASS WEDNESDAY UPDATE WILL ACCEPT BEING AMBUSHED BY CAKE

I mean, I’m not mad about cake to be honest, I’d rather be ambushed by an artisan-made craft sausage roll such as one may buy at Tebay, the most middle-class of all motorway services. But if you’re going to be ambushed and porky-pastries aren’t an option, it may as well be by cake. It reminds me of the joke about the guy who drowned in a vat of ale; colleagues tried to rescue him but he fought them off bravely.

All that aside, hope everyone’s doing well. It’s been a flat-out week here at the lang cat Port Authority, as we gear up for #langcatlive and publish wave four of our annual omnibus adviser study, State of the Adviser Nation. SOTAN (as it’s inevitably called, just one letter away from going full black metal with industry research and that’s an ambition right there) is a beast – this year just under 450 firms took an average of 32 minutes each to answer over 80 questions. If you were one of them, we offer the humblest and deepest thanks attack.

I’ll share a couple of findings in a mo, but it’s worth saying that what we try to do in SOTAN each year is look beyond ‘what cashflow modelling tool do you use?’ or whatever, and try to get behind what’s going on and what might happen. This is a complex sector – you’re all very special – and to say that the advisory profession thinks one way about anything is daft. So we try to embrace that complexity too.

Here’s something interesting. We asked individuals who are giving advice how traditional or progressive they are in their own opinion. For this exercise, ‘traditional’ means centred on tax, investment and product advice – still absolutely crucial – and ‘progressive’ means centred on what we now call financial or life planning. We then asked them to do the same for their firm. Here’s how it came out:

Have a look along the right hand end of the chart. Of those who see themselves as progressive – and we chose our words carefully so as not to imply that one was better than the other – we’ve got quite a mismatch. To be reductive about it, many planners see themselves as more progressive than the firm they work in. Now, we didn’t dig into why that is – it might be business practices, it might be use of tech, it might even be the culture of the firm or its approach to diversity and inclusion – but nonetheless it’s worth dwelling on. We’ll do that digging in subsequent waves now we see there’s a mismatch, but one conclusion I think it’s safe to draw is that there is a significant number of planners out there who would welcome working in and for businesses which set themselves out as progressive. This may be something to dwell on if you’re thinking about how you position yourselves to both clients and potential recruits.

I’d also like to show you one of my favourite charts. We asked how recently respondents had been approached by a consolidator. Here’s what happened: 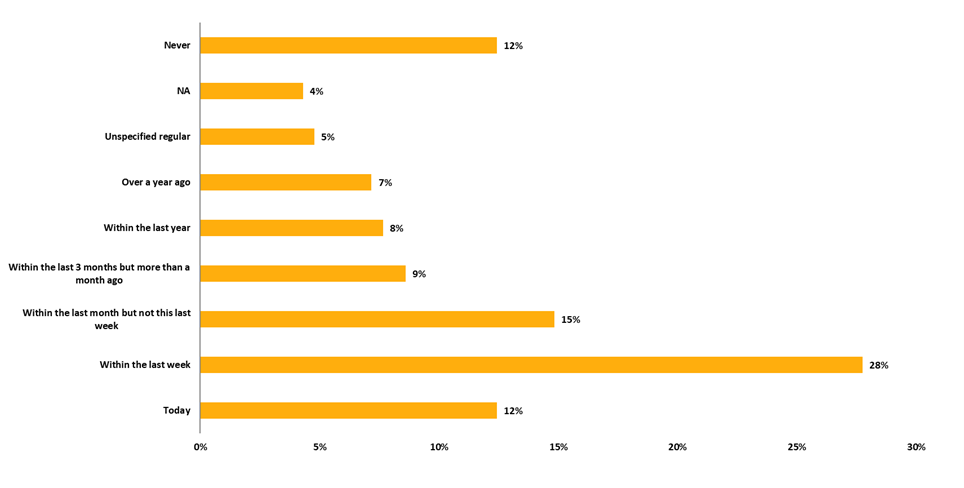 40% within the last week and over half within the last month! You have to hand it to those consolidator BDMs, they’re hitting their numbers. Interestingly, though, only 9% of ‘influencers’ (our research-speak for those who make strategic decisions on the future of their firm) had plans to be owned by a consolidator in the next five years. So one of two things is true: either a whole heap of firms are going to be ambushed by consolidator ownership (this is a bit like cake but not really), or a whole heap of BDMs aren’t going to have very good bonuses.

More seriously, I think we see from other answers in SOTAN that we might be starting to see a slowing in adviser consolidation. Too many stories are around of what really happens when you sign up to that tempting headline figure, and sometimes what it means in terms of staff and for clients too. Consolidators who are focused on doing the right thing for firms and clients should be fine; the others – well, the value pool looks like it’ll be diminishing.

There are a thousand stories in SOTAN and we’ll share more over the weeks and months to come. We give free copies to every firm who participates, so if you like hearing snippets from stuff like this come and play in this year’s wave and we’ll sort you out. It’ll go live in the autumn, which will be here in a flash. With or without cakeism.

See you next week. Watch out for the cake; it can be sly.