IF WE COULD START THE TOP CLASS WEDNESDAY UPDATE AGAIN, WE WOULD

Here’s an interesting question. For those of you who run an advisory business, if you could start it again, would you choose the same technology underpinnings and kit that you use at the moment? We’re talking clean slate, no legacy, nothing.

For my part, I think I’d have made different decisions on CRM much earlier if I’d known that the lang cat would grow to the size it is now. To be honest, I assumed someone would have made us stop doing what we’re doing by now and I’d be washing cars in IFA car parks, but for some reason we are still going.

I’m interested in this because as I’ve been out and about on tour this year – I’m writing this at the modest and understated Rudding Park near Harrogate where I’m speaking at a thing – I’ve heard lots of advisers expressing dissatisfaction about lots of things, but not really doing anything about it. The reasons vary, but usually the real one is that legacy constrains small businesses just as much as it constrains big ones. I’ll come back to that in a moment.

So the idea of this question, which was a part of our State of the Adviser Nation survey in November – thanks to the just over 400 firms who took part – was to say look, we’ve released you from your legacy worries and you’re free! Free, we tell you, to gambol across the technological plains like some kind of digital gazelle, or perhaps a dik-dik.

Here’s what firms told us: 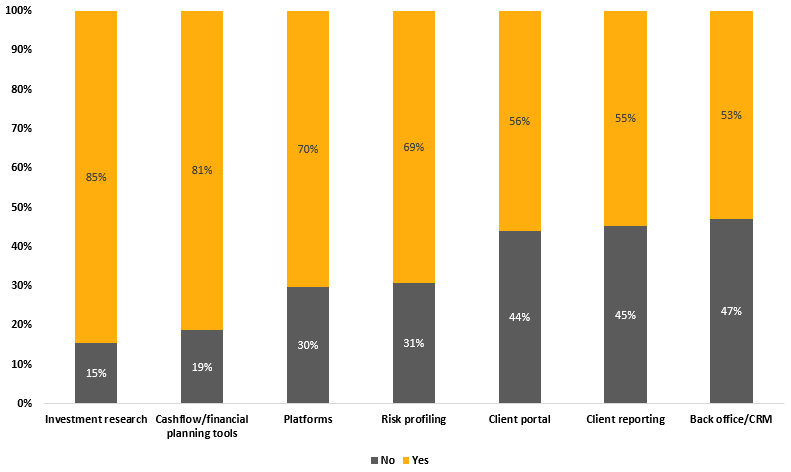 So 85% of firms would pick the same investment research tools – good news if you’re FE or Morningstar. 81% love their cashflow planning tool so much that they’d buy again.

We were surprised to see that 70% of firms would pick the same platform even if they didn’t have to. We thought it would be much lower than that. When we look at the vox pops that attached to the survey, we saw a double-edged sword here – some folk are genuinely happy which is nice, but many respondents suggested that – to paraphrase – you could chuck a blanket over the whole platform market so it didn’t matter who you picked.

Back office systems performed most poorly here – despite firms telling us in another part of the survey that their BOS was the most important part of their tech stack. So the thing advisers care most about is the thing they’re least satisfied with. Lots of room for existing suppliers to win hearts and minds here – and lots of room for innovation too.

SOMETHING FOR THE WEEKEND?

A company not picking the same thing even because it could is Quilter, who put on the traditional pads and a helmet and went live with the first tranche of its replatforming last weekend. You have to applaud the effort Quilter has put in here – with a member of staff tasked to be onsite with each of the 100 firms moving over, and access to the red phone for any problems.

Anyway, first signs are good. We expected our phones to be red-hot if things weren’t going well, and they are barely warm. That said, it’s very early days, and no-one should be performing complex high fives just yet. To be fair to Quilter, it’s extremely aware of that. Quilter also tells me it didn’t put words in the mouth of this IFA, who finds the new system delicious, delightful and delovely. With advocates like this, who needs marketing?

TELL US WHAT YOU THINK

We check in on how you feel about platforms quarterly these days. Lots of you have already given us your assessment of how your platforms have dealt with you over the last quarter – thank you very much for that. If any of you would fancy helping us out and have 5 minutes free we’d be massively grateful in ways that I can only hint at here because of legislation. You can find the survey here.

See you next week
Mark