Let’s go old school for a minute. It’s been simply yonks since I’ve done a pricing blog; back in the day it felt like I did two a week. I imagine it felt worse than that to anyone reading them.

Anyway, after a long time of very little change in platform pricing, things are on the march. I say this in the full knowledge that the published rack rate bears as much relationship to what many clients pay as those actual rack rate signs in hotels do. “Single room, £185”, “Under £100k, 0.38%”, stuff like that.

But not everyone is on a deal, and even if most are, pricing moves are a good indicator of what’s going on inside the smoke-free rooms of providers.

A LITTLE OFF THE TOP, SIR?

And so let us turn our attention to the fine folk of Elevate, one of the Standard Life stable of platforms. As you may have read today, Elevate is about to have a fairly decent haircut.

I’ll do the numbers in a moment, but first let’s have a wee think about Elevate itself. Standard Life Aberdeen (if that’s what we call this bit; I can’t get used to it) is trying hard to position Elevate as a streamlined, no-frills alternative to Wrap, its considerably more fully-featured cousin. Parmenion, elsewhere in the stable, is ploughing a different furrow for now.

One of the problems with this positioning has been that it’s perfectly feasible for Wrap to cost less than Elevate, which kind of snookers the whole ‘wrap-light’ agenda. This price cut is clearly meant to take care of that.

That’s not the only issue – there are plenty of firms on Wrap who don’t use the full extent of its (pretty impressive) DFM model portfolio functionality. What does this mean for those clients? It’s hard to imagine SLA going as far as cutting its own throat to move books from Wrap to Elevate, but maybe it will.

A little tougher is the fact that Elevate is one of the platforms mentioned by adviser firms that they’re taking assets away from. SLA has put some investment into the platform lately, which is welcome, but it’s not easy to stem the tide. No doubt fingers are crossed that this cut will help.

OK, let’s do those numbers.

The change that matters is £150k – £750k – 0.36% down 0.25%. That’s quite aggressive, especially considering Elevate has stepped pricing, which means that the entire pot is charged at that amount, rather than the blended, tiered trick-of-the-light approach adopted by most platforms. I’ve always liked Elevate’s stepped shape; I’m glad to see it’s staying.

At this point we should probably do a heatmap and a graph, just like we used to back in the day. So here we go:

And here’s a cut-down heatmap (I’m not including all the permutations so as to maintain a sense of mystery. #marketing). We assume a holding of 50% SIPP, 25% ISA, 25% GIA, and investment in an advisory model portfolio with funds only in it. So real life comparative costs will vary, innit. 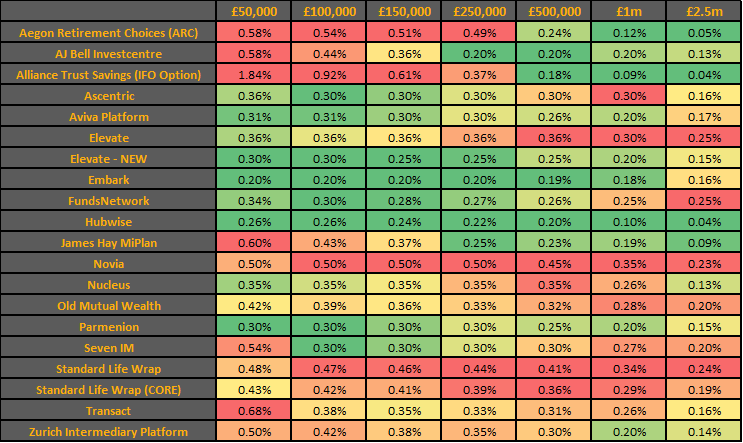 It’s good news for the Edinburgh/Bristol massive – greens pretty much across the board. Elevate aims pretty much where Aviva has done the bulk of its business – we can see here that before any deals, you’re that little bit cheaper.

Unalloyed good news? Well, yes if you’re a new customer. If you’re an existing customer, you either have to have the new pricing switched on for you by your adviser filling out a form (I’m really hoping this isn’t a paper form) for each client or hanging on till the end of 2019, when Elevate will ‘best price’ you – so if you’re on a discounted shape which is better than the new one you’ll hang onto it, but otherwise you’ll move onto this.

So there is the potential of 8 months of your client paying more than she needs to unless you’re up for the extra admin. I’m told this is a development thing; it’ll take more time to build all the automatic switcheroo kit, and I’m sure that’s true. Still a bit of a faff though.

Anyway, let’s not leave it on a sour note. This is welcome stuff, and even if it doesn’t change how firms feel about Elevate, it’ll certainly remove pricing from the discussion (and I imagine the Elevate guys will be hoping that it’ll make it harder to justify a transfer away).

We’re going to see more of this as platforms tire of incessant behind-the-scenes dealmaking (keeping track of it alone is a pain in the Ronson, trust me on this) and get the rate card down to something resembling reality.

And as it was, so shall it be: we’ll be here to document it all.