So here’s the thing. You were all nice enough to sign up to hear from the lang cat at some point over the last few years, and when we offered you the chance to stop you chose not to. And what do we do? We don’t even send you so much as a Happy New Year, that’s what we do.

For years I’ve thought about doing a weekly update on what’s going on in our sector; the things that have drifted across my transom and the stuff that I think is worthy of your time. But I’ve never done it; not really sure why. Laziness, probably.

2019 is different to other years, though. Not in its composition – May will still be in there, as will July and other months to which we have become accustomed over time. Not in its length either, though if this Brexit stuff rumbles on it may seem longer than usual.

No, 2019 is going to be a year where there’s a huge amount to deal with. We’ve got new disclosure rules, which you don’t think are important but totally are. We’ve got uncertain markets, and clients receiving new disclosure statements which show them losing money. No-one asks questions when the graphs are going up and to the right. It’s when they go down and to the right that chinks appear. Portfolios are going to be tested like never before. The provider landscape is going to change, maybe quite dramatically. And in there will be chances for smart people and smart businesses to make a difference, both to the world out there and to their own wellbeing.

And I want to write about it.

So this is the first Top Class Wednesday Update. It’s called that because it’s an update, I’m going to send it out at noon on Wednesdays and it’s going to be top class. I’ll post it to the website as well as emailing it out. Apart from this one, it’ll never be more than 400 words or so, maybe less, and it’s designed to mark the mid-point of the week with some interesting bits and bobs. Stuff from the lang cat will pop up from time to time but that’s not the purpose of this: I’ll link  to other firms and sites much more than our own.

I’ll also happily take questions as long as you’re happy for me to answer them in the Update (it gets a capital letter) – just email me at [email protected].

And so here we go. Be gentle with me.

WHAT HANDS ARE THESE? THEY PLUCK OUT MINE EYES!

First up, I want to draw your big brain’s attention to Justin Cash’s piece here in Money Marketing. Justin took one for the team and spent half an hour of his life he won’t get back watching SJP client testimonial videos.

I’ve watched a couple and they made me want to pluck out my own eyes, but they’re not aimed at me. They’re aimed at the regulator, and they’re aimed at existing customers who might be starting to wonder about the direction of graphs (see above) and the disclosure they’re just about to get. This is a technique which is sometimes known as ‘social proof’, and it’s powerful stuff – clients are less likely to have a gripe if they think everyone else is happy. “It’s probably just me” says the client, and gets back to whatever it is SJP clients do when not paying charges.

My thing is – I can’t believe SJP has blinked in this way. I don’t think this is done from a position of confidence; I think it’s a shoring up and a pre-emptive shot at reducing price pressure in a year where that’s definitely going to be a theme. But Justin is right – SJP does great PR, and there’s plenty for others to learn.

A few other things of note…

And that’s it for the inaugural Top Class Wednesday Update. Till next week, remain pure of heart, strong of arm and awesome in the ways that only you can be. 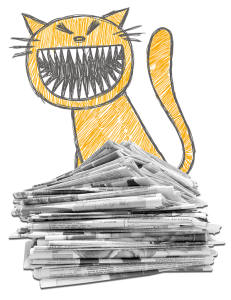