Posted on 21st January 2018 by dijifydevs

The cat is officially out of the bag (not that we condone cats being in bags). One of the changes ushered in at the start of the year by the beast that is MIFID II is the requirement for fund groups to disclose the additional transaction costs that are charged to their funds, on top of the previously disclosed ongoing charge figure (OCF). Let’s cut to the chase and see exactly what this means! 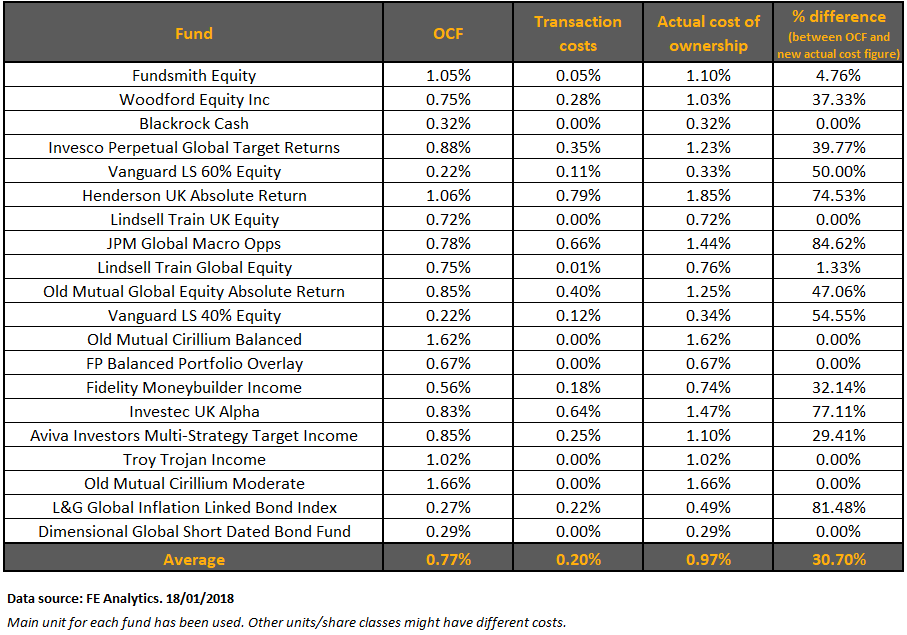 The above shows the total cost of investing, combining the previously disclosed OCF with the newly visible transaction costs, for the top 20 selling funds of 2016 (source: Fundscape).

These are purely fund costs, most investors will also be paying platform fees, as well as potentially advice and DFM fees. The newly disclosed transaction costs include the explicit costs the manager incurs for administering the fund (broker commission, taxes, custodial charges) as well as any implicit costs associated with trading activity. And Scooby Snacks.

So, the fund groups have opened the Mystery Machine. What can we now see? Out of the top 20 selling funds 13 have additional transaction charges, ranging from a few bps for the high conviction/low turnover funds such as Fundsmith Equity, to some much larger figures for the likes of JPM Global Macro Opps and Investec UK Alpha. Henderson UK Absolute Return is the worst offender here. Not only are there the additional 0.79bps of transaction costs, but there is also a performance fee (not shown). If this kicks in the fund costs are in excess of 300bps.

Now, before we all go off on one it’s worth keeping a couple of points in mind. No-one’s charges have actually gone up. Investors have always been paying these fees, it’s just that now that the fund groups have the good grace (read: obligation) to tell you what they are charging. Secondly, most of the funds shown here are delivering good/excellent returns. Advisers and investors will make their own value judgement, but we suspect many will continue to conclude that their investments in these funds represent value for money.

However, that all said it still feels a bit grubby. Most advisers knew there was more to fund costs than the OCF showed but in the absence of formal disclosure this was just speculation, and they had to work with what the fund groups told them. They now face the uncomfortable task of telling clients that whilst they thought they were paying x, they are actually paying x+y. Even if this is only a few bps it’s not a great conversation, and in some cases could create a suitability issue.

From an investor’s point of view, it’s likely to be a real turn off. Numerous surveys over recent years have shown how people regard financial services at roughly the levels of trust normally reserved for politicians and estate agents. And with fund groups now saying, Oh, sorry, when we said we were charging you x, we actually meant a figure over a third higher, it’s not hard to understand why.

This feeling of grubbiness is compounded when you remember just how hard it’s been to get the industry to step up to the plate and make these changes. This is not anything radical, all they are being asked to do is to tell people what it costs to invest with them. It’s taken EU regulation to get this out in the open, rather than transparency being a rule of thumb, and parts of the industry were kicking and screaming all the way.

All of this this does nothing to alter the perception of fund groups having little or no concern for investor outcomes, but perhaps the tide is turning. These rules, combined (hopefully) with the remedies proposed via the FCA’s Asset Management Market Study are significant. Maybe, just maybe, fund groups won’t be able to get away with it any more, and those pesky KIIDs will show exactly what has been going on. 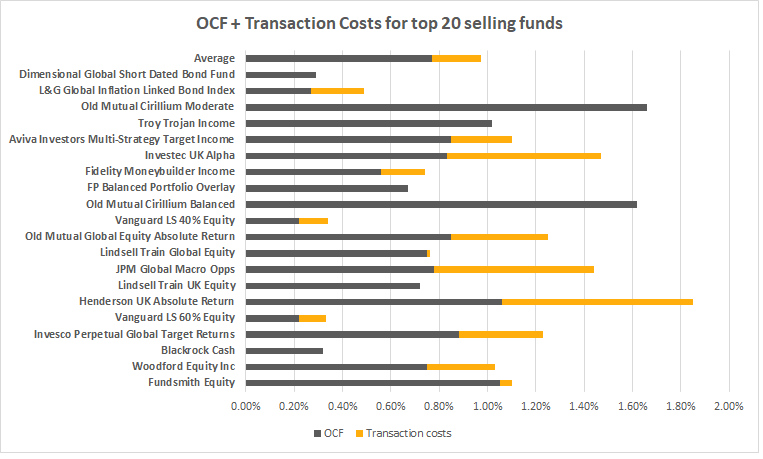 OPEN NOW  Advice professionals take part in our biggest survey of the year. Full playback of results for all participants