ALL ABOARD THE HEATMAPS. EMBARK COMES TO MARKET.

Righto, two things. (1) Iâ’ve given myself half an hour to race through this and (2) I’m very sorry about the pun. Terry’s idea. With both of these in mind, let’s move swiftly on.

Embark finally announced its long-awaited charging structure the other day and you know the drill by now, we’ve got your back on this. Time to dust the stoor off the lang cat pricing engine and see how competitive it looks. *SPOILER ALERT* Very.

First things first, here’s the skinny on how it shapes up:

25 minutes to go. Jings. Pension table first. Custody and wrapper costs only here. No trading activity. Two lines for Embark, one for the introductory rate and one for the! Oh. You figured it out. Cool.

One last thing to point out before we get to the colouring book. These tables are a subset of our full peer group and AUA points. Subscribers to our stuff get access to the full gig.

And now a mixed wrapper portfolio (50% pension, 25% ISA, 25% GIA) with a 10-fund model portfolio that rebalances quarterly. Your mileage will vary[1]. 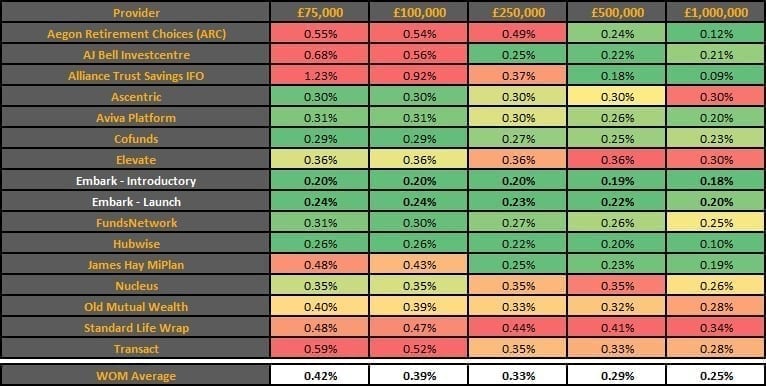 Lots to say and my entirely artificial clock is ticking. Here are the headlines:

It’s been a funny old time in platform pricing over the past year or so. Lots of activity but in different directions, the net result of which has been ‘much of a muchness’ in terms of market rate. Until now that is. Embark, along with other noob, Hubwise, is threatening to shake things up a bit and redefine our perception of the market rate.

We expect further market activity in the next wee while. An obvious example is Aegon and Cofunds post conscious-coupling. Their initial rates of 0.60% and 0.29% respectively are clearly incompatible, not to mention the fact that Aegon has been extremely vocal about scale driving down costs.

The FCA’s Investment Platforms Market Study and its quest to assess competition and value for money lurks in the hinterland alongside all of this. You can’t escape the feeling that these pricing structures will excuse Embark from most of the awkward conversations. In fact, they may well have kicked off a few more elsewhere.

One minute to go. Just enough time for a shameless punt of our stuff. We put out our annual platform guide the other week complete with comprehensive pricing analysis. Embark just missed the cut on this but if you’d like updated tables, give me a shout.

[1] Based on our quarterly platform research, this is a representative wrapper split. Obviously, each client is a special snowflake and will have their own split.