YOU CALL THAT A PLATFORM RE-PRICE? AJ BELL YOUINVEST FLASHES ITS NEW CHARGES

It was only a few days ago that I turned to one of my colleagues (I can’t remember who it was. It doesn’t matter, it’s not that great an anecdote and there’s at least a 50% chance I’m making it up anyway.) and complained that there’s not been a re-price in the direct-to-consumer market for ages now. Well, it seems like someone out there was listening to my prayers. And in other news, I’m utterly sick of neither winning the lottery nor Jennifer Lawrence returning my calls.

Anyhoo, this is just my whimsical way of introducing the news that the boys and girls at AJ Bell Youinvest have not only fundamentally changed its pricing structure but also instantly rendered the pricing tables in our recent D2C guide obsolete. BOOM!

New fund switching charges, new core platform charges, new admin charges, new pension income charges. Whoah there! There’s so much going on Steve, where do we even start? Let’s fire all the main changes into a table and try and get a handle on things. 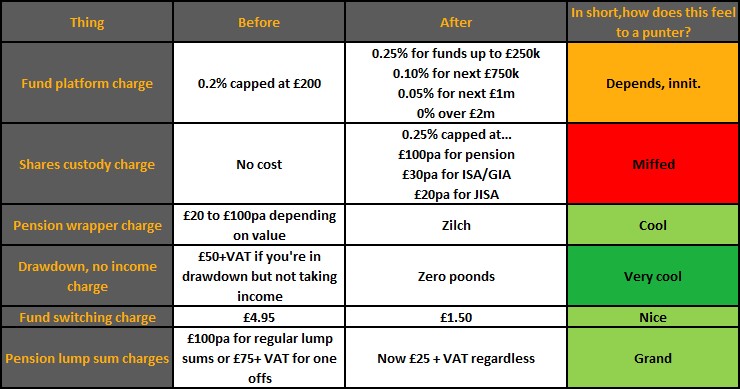 Righto, lets have a look in turn:

So, how does this all affect our pricing tables? Let’s look at SIPP products on the fund side first. (Core platform charges + annual admin charges + 2 buys and 2 sells where providers charge.) 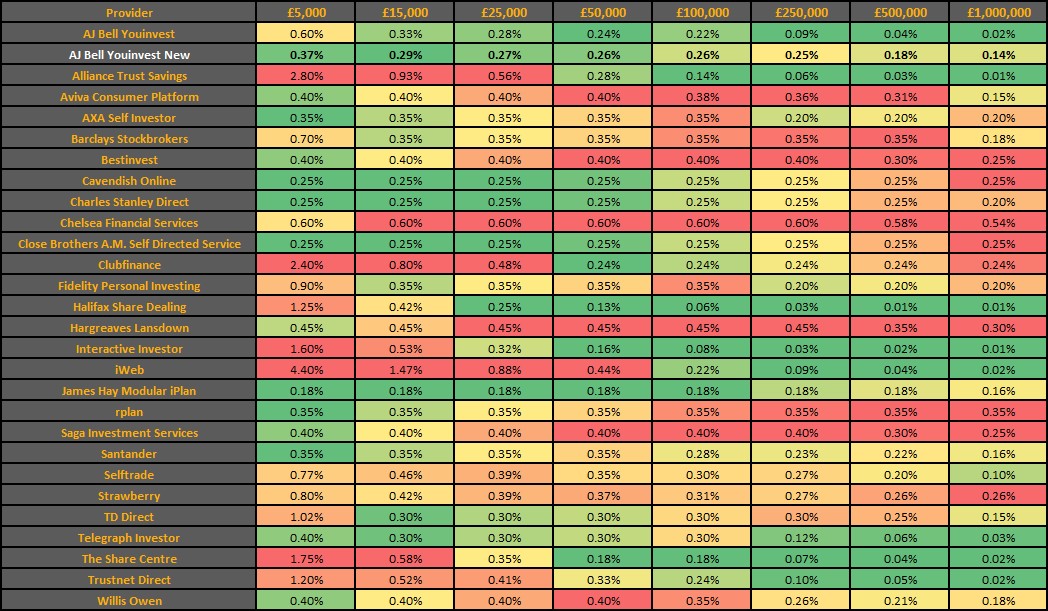 Shares have feelings too so here’s how investment in exchange traded instruments through a general account with 12 trades per year looks. We always illustrate this one in pounds only as it highlights that the majority don’t charge a %-based custody charge for equities. 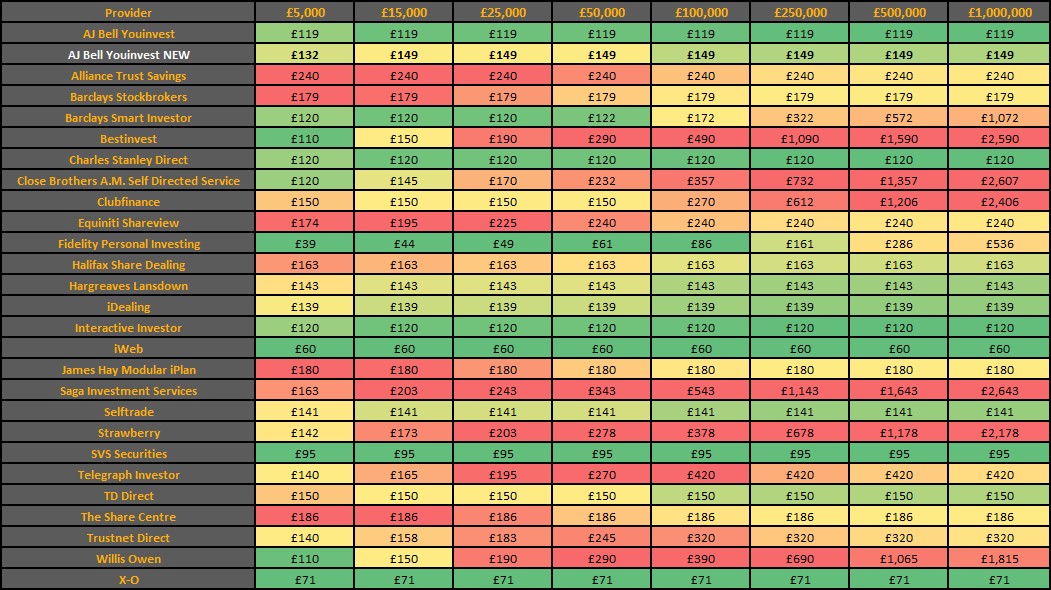 Now that’s an awful lot of information to digest. Ultimately, where you stand on this depends on your perspective. With our provider hat on, if you’re looking to change prices you either make a strategic shift here or there, some customers win/lose but most stay pretty much as they were, or you make a fundamental change that affects pretty much everyone. That’s what Youinvest has done here in an attempt to simplify things across the board and it’s a bold move.

Through the lens of the customer, we can see from the heatmaps that Youinvest has retained its position as a low cost provider pretty much across the board, with pension customers at the lower end among the biggest winners, which we like. So for Youinvest, it’s more about managing the messages[1] on the fringes for those affected in the other direction. All the heatmaps in the world aren’t going to comfort a customer who sees their charges demonstrably increase for the same service. We think, overall, there’s more to like than dislike about the new structure but ultimately, it’s over to the customer. What do you think? Drop us a line, we’d love to hear your views.

Lots of price changes. Youinvest still inexpensive on average. If you invest in funds only then your charges are going up a bit, but if you have a modest pot with a pension then they could well be going down. If you’re in drawdown, then you might well save a bit as some of the admin charges are reducing. If you invest in shares, then you’re facing an additional custody charge that is only really significant if you have a biggish pension pot (but is offset by the removal of the main wrapper admin charge) Phew.

[1] It’s launched a calculator for customers who want to see where they stand. Get it here.

OPEN NOW  Advice professionals take part in our biggest survey of the year. Full playback of results for all participants