Learning the language of risk

I recently spent a couple of days with one of our PR clients, Paul Resnik from FinaMetrica. For those who don’t know FinaMetrica, they specialise in helping financial advisers and their clients understand investment risk tolerance through tools and educational material.

One of the things we discussed was the language of risk and the fact there was a good deal of misunderstanding out there which was potentially having a detrimental effect on client outcomes.

First. Let’s get one thing out of the way. Paul hasn’t asked me to do this blog. I’m doing it because I genuinely find this stuff interesting and I enjoy reading all sorts of views on risk issues. I’m fully aware some of you reading this will think otherwise, but there it is.

Now, I’m a bit of a simpleton. I hopped, skipped, jumped and clicked my heels out of school at 16 to seek gainful employment. So the thought of academic journals on the science of psychometrics applied to investment risk sends me running for the hills.

However, one thing that Paul has drummed into me over the years we’ve worked together is that risk tolerance is a personality trait that is relatively stable over time. I had at first thought risk tolerance was revealed by behaviour – but I’ve been convinced otherwise.

I’ve just put this very question to twitter (yes, I appreciate the irony of testing the science of psychometrics via one of the most unscientific means imaginable). What I found didn’t surprise me really. The split of opinion was pretty much right down the middle. 48% of those who took the poll (thank you to the 69 people who took the trouble by the way) said risk tolerance is a personality trait. The other 52%, like me at first, think it’s revealed by behaviour. I’m a layman in all of this, so I’m not going to say 52% of people are wrong. But I will explain how I reached my conclusion. 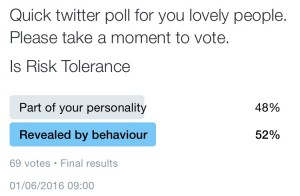 If I don’t understand something, it happens a lot! I always try to break the problem down and simplify it in terms I get. This is what I did for the language of risk. The resulting story has nothing to do with investments directly, but everything to do with the psychology of risk.

My tolerance to public speaking (risk tolerance)
I have a very low tolerance to public speaking. In fact, I hate it. I get very nervous. I avoid it when I can. In my 25 years in financial services I’ve had to give presentations to large audiences and sit on panel debates and at times I’ve even been required to front up big news and manage crisis situations on TV and radio. Every time I’ve hated the experience. This is probably why I have ended up in PR where it’s my job to put other people in the spotlight while I skulk in the shadows. This aversion to public speaking is hard-wired into my DNA. It’s a personality trait. Yes, training and experience over the years has helped. But I’ve accepted it’s not one of my natural strengths.

Requirement to speak in public (risk required)
Let’s say, just for illustrative purposes you understand, Mark Polson decides to fire me for real one of these days.

I find myself on the job market. So I go to Nicki, a recruitment consultant. I talk to Nicki and tell her about myself. I tell her my target salary is £75k a year. I also tell her about my tolerance to public speaking, and my attitude to it.

Nicki does a grand job in finding me five potential roles. At one end of the scale, there’s a job that pays £50k a year and has no requirement to speak in public. At the other end of the scale, there’s another job that pays £100k but requires me to be on my feet speaking publically the majority of the time. I now understand the public speaking requirement. I can make an informed decision.

Capacity for public speaking (risk capacity)
The job in the middle is the Goldilocks one. It pays £75k and it may be necessary for me to speak in public very occasionally. Ok, I can deal with that. If I had chosen the one at £50k I would have quickly realised it wasn’t for me when I struggled to pay the mortgage and put food on the table. Due to financial necessity I would have been back on the job market within months. If I’d taken the job at £100k I would have bailed because I’d be a nervous wreck within days.

To jog this along a bit, let’s now assume I aced the interview and landed the job that matched my requirements and capacity.

Public speaking behaviour (risk behaviour)
In my first week in the new job I find myself talking to a group of recruitment consultants. It’s a big audience and I recognise no one other than Nicki; my very own recruitment consultant who helped me land this new gig. Only she and I know that I’m hating every minute of this. To everyone else, my behaviour (the very fact I’m on my feet speaking to them) indicates that I’m comfortable doing what I’m doing. They would all be wrong. They have incorrectly assumed my behaviour is an indication of my tolerance to public speaking. It’s not. My behaviour is an indication of the compromises I’ve made along the way, including my attitude to public speaking, my requirement to speak in public and my capacity to do it.

If any one of those recruitment consultants were to assume my tolerance (my personality trait) based on my behaviour in that one moment, they’d probably end up matching me to the wrong job.

My discussion with Paul and the results of my twitter poll have convinced me there is some confusion out there on the language of risk. Perhaps creating some non-academic examples will help aid understanding.

Of course, I’m happy to present my ideas to you and your teams any time you want. I love that kind of stuff.