So it’s the afternoon of 31 December, the lang kittens have been beaten over the head repeatedly until they agree to a nap so they can stay up to see the bells in, and I have a few minutes at the end of a tumultuous year to write this.

This, being a self-indulgent round up of the year. I shall point out, as I do every time I do one of these, that yes, it is indeed self-indulgent, and no, no-one really gives a damn except me.

But none of that matters, largely because it’s my blog not yours, and also because self-censorship is not a skill I’ve ever really learned. Maybe if I had I might still be in corporate life. *shudders*

Lots happened in our little corner of the garden this year and there’s no great value in going back over it all. But I’ll carry two big themes away:

For next year? Watch replatforming! we had some of it in 2015, most of which was pretty tortuous, and there’s more to come this year. Everyone needs to have patience with companies going through this, but the companies themselves need to be honest with advisers and clients, and not delude themselves that it’s all going to be fine. As I’m fond of saying, there is no recorded instance of replatforming going well.

We’ll see the back book integrators (Aegon, Zurich, others) accelerate and become very big platforms in their own right? the interesting thing is what happens when that work is done. Can they become vertically integrated shops like Standard Life and Old Mutual? We’ll see the black box providers such as SEI and Pershing do many more interesting things in the market, and over time it’ll be easier and easier for firms to create a platform in their own image. The niche guys will still be niche, the big guys will still be big, but those stuck in the middle will find it increasingly hard to get distribution footprint, and will also struggle to get development priority resource. 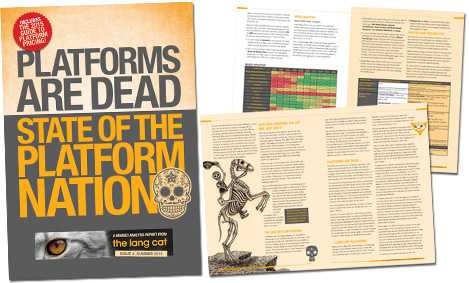 I’d like this year to be one when we stop trying to out manufacture each other. When we wrote that Platforms Are Dead, that’s what we really meant! the days of asset flows shifting due to more ticks on a crappy due diligence matrix are gone. Now it’s about doing the basics really well as a bare minimum. From there it’s about recentering the whole platform experience so that itÃ¢??s less of a Godawful schlep to use.

From a lang cat point of view, this was a huge year for us. We were joined by Mike Barrett of Old Mutual, Terry Huddart of Nucleus and Shona McCowan of Aegon. Our little team is 10-strong now and we’re about to start hiring again. We’re gonna need a bigger cat basket. We published influential studies into advised and D2C platforms (including a deep dive into platform pricing which made us no friends at all), pension reforms and lots of other stuff. Our (well, Steve’s) pricing tables are now a feature of pretty much every personal finance section in the national press. And we still managed to have a giggle along the way.

2016 for us will be a year of consolidation and growth. We’ll keep applying our technical expertise to deliver insight and analysis that you won’t find elsewhere. Data is getting easier and easier to find, as it should be. It’s what you do with that data that matters. Our contention remains that if you know what you’re talking about and you can put it across with a half-smile on your face and some pictures of aggressive looking cats, then you’re all set.

As happens every year, when I look back at all the shitty stuff happening in far-off and not so far-off places, I remain grateful that we work in a sector which encourages more than one point of view and in which (with just a couple of mardy exceptions) we can robustly take the piss out of one another.

So thank you to all our clients and everyone we’ve worked with in 2015. Thank you from me to all the felines, please don’t go and get proper jobs any time soon. Thanks too to the apers and the haters, you keep us getting better. Here’s to a peaceful and fun 2016.