Having spent the last couple of months SWIMMING in the pool of change that is the UK at retirement market – not just DIPPING A TOE, you understand but DIVING right on in there – a couple of things struck me.

First, that freedom can be a pyrrhic victory. Old King Pyrrus of Epirus might have started the trend but that whole winning-in-such-a-way-that-you’re-no-better-off rather suits our British demeanour. We tend to expect it to go a bit wrong, that there will be a catch. And sometimes there is.

Consumers now have freedom to do what they want with their retirement savings, for good or otherwise. But in handing over that freedom, a layer of protection is lost. Some poor decisions will be made and some people will have a poorer retirement as a result. Because this is about a person’s whole retirement. Potentially until they are 90 or more. And it feels as if the importance of income lasting for that whole time has been set adrift in a sea of UFPLS (is a name that sounds like a Hogwarts house really the best we could do?) and marginal tax rates.

The other thing to strike me was that, yet again, the industry is firing well over the heads of many of those most in need of accessible information. Predictions of a return to advice aside, there are many consumers with smaller pension pots and no intention of seeking advice. And probably not even guidance.

Based on what we’ve seen from providers’ own experience, an awful lot of that particular group and probably others don’t even have a grasp on the basics. Take state pensions. We’ve all heard of numerous cases where consumers don’t know how much they are entitled to or even when they can start to receive it. Hardly anyone has worked out that there will be a tax bill if you cash in your pension. Still feel comfortable chatting through the finer points of Ravenclaws?

But why the sudden interest in this one topic? Why the PO(U)RING over research and SURFING numbers? Well, it’s all been in the build up to opening the FLOODGATES for When The Levee Breaks: What Next for the UK Retirement Savings Market? All the water gags making more sense now? See now how the blog title isn’t a typo? Good. Attaboy. 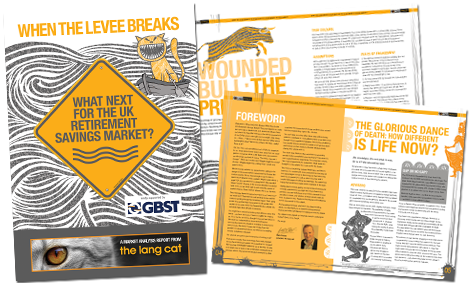 Ah, yes. This is the lang cat’s take not just on what’s been happening in the run up to 6 April and THE BIG CHAAAAAAAANGE but what might happen in the coming months and beyond, how the landscape might look and what that means for advisers, providers and consumers.

You can find out all about it here and, thanks to those nice people at GBST, you can download it for not-a-single-penny. There might be a lot of reports on the subject at the moment but we’re pretty confident that this is the only one featuring lizards. And a rather good dingo joke. Go on, you know you want to.