Catchy title. Just a short update to confirm a couple of, you guessed it, changes to on-platform pensions.

Following Fundnetwork’s recent removal of drawdown charges and then changes to the Cofunds Pension Account, next up with the moves are Parmenion and Ascentric.

First up, we’ll look at the platform arm of Royal London Mutual. Ascentric, having mercifully dodged an avian-based rebrand, has gone and reduced its SIPP charges. Headlines being:

Ascentric has also confirmed it will be reviewing drawdown charges following that Budget so we’ll look out for that one with interest.

Next up are Parmenion, making its debut in our SIPP tables. For some time now, it has offered 30-sum third party SIPP wrappers on its platform, but has now taken the leap to develop an in-house proposition.

Many advisers prefer a fully integrated picture. Smoother customer journey and easier admin being the obvious reasons so this is no doubt good news. (Not that third-party links are the devil, mind: horses for courses you know) At-retirement stuff is currently in development too, so we’ll look out for that.

The on-platform SIPP is totally free. Well, not really, it just doesn’t have any additional charges to the headline platform ones. With that in mind, it’s probably worth a wee refresher on them.

Note that it’s a stepped approach here rather than tiered so each new charge level applies to your whole pot. While we’re not massive fans of Ad Valorem charging, we do prefer stepped if possible. Clarity and all that.

What happens at Â£3m+ is anyone’s guess? Probably a complimentary red-carpet.

Righto, onto the heatmaps. As usual, for blogs, you’ll note that this is only a subset of the fund levels and competitors we look at. 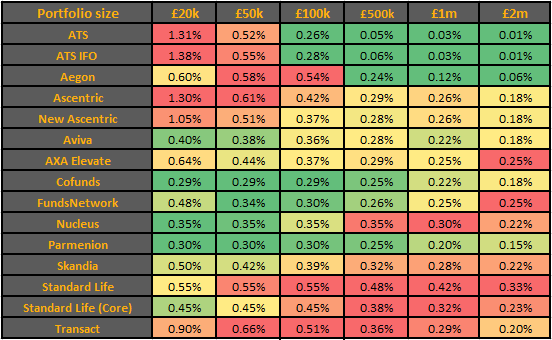 At a glance it’s pretty much as you were for the lads at Ascentric. That fixed Â£60 charge on the first Â£60k really hurts it, so they look all red compared to others, but less so at the higher end as the effect reduces (It is a subset though, bear in mind)

Worth noting though is that we look at ongoing charges only in our tables, so fans of rudimentary arithmetic will be able to calculate that the difference between old and new here is the fifty poonds reduction in annual charge. Still a good news story overall and an example of why it’s important to look at our tables in context.

Parmenion on the other hand, steam in all shiny and green almost right across the piece with only the fixed fee renegades at ATS and Aegon with its new charge cap standing out at the higher end.

There’s not a huge deal else left to say on the analysis front so we’ll leave it there. There is a clear trend in the market forming here, as providers sharpen their collective pencils following the increased focus on all things pension. We expect more changes to come as the months pass.